How will you react?

There's a gathering happening Uraday night, loads of people, very important. Everyone who's someone is going to be there. Apparently there's going to be a great big demonstration of some new magic. A scientific breakthrough, they're saying.

It's at Verica Central Hall. High security, the service staff especially. They're not letting any new hires anywhere near the building the month before and they're even combing the entrances and exits for "special surprises" every night. No one who's not on the guest list is getting in.

That said, I hear the Lady Ricca on fourth row is looking for a new beau. It's all hush-hush, of course, but no one will be surprised if her plus one is someone new.

Bei tugged at his sleeves and slipped through the horde of guests on the dance floor. He was almost there. He could almost taste the freedom he was so close to. Just a few more steps and he could vanish onto the outdoor balcony for a few precious moments.

"Belijah! Come have a drink with us, won't you?"

Oh for (God's) sake, he thought and hid his cringe as he turned to face the group of women. He plastered his fake smile on but even the sight of the girls instant blushes did nothing to quell his irritation. They were as fake as he was and he was already so tired of it. The sooner this stupid gala ended, the better. "I was just about to slip away, ladies, so if you'll excuse me..."

"Oh come now, who would deny the presence of such pretty women?" the first speaker, a woman his age named Ferrah, purred.

Bei gave an entirely too fake laugh and rubbed the back of his neck as though he were embarrassed. "Very true," he agreed as he spotted his father across the room. The older man was in the midst of telling what seemed to be an engrossing tale but that Bei knew to be the history of their family. Lord Laifan loved to boast of their origins and how they descended directly from the founder of magic himself.

Ferrah followed his gaze and smirked. "Well?' she probed. "What's this mysterious magic we're all about to see, anyway?"

Bei grinned, "If I told you, that would ruin the surprise."

"Oh come on, don't be so secretive. We've known each other a long time, yeah? You can tell me," Ferrah sent him a wink that she probably thought was attractive. In reality, he had to try not to laugh as her entire face scrunched with the gesture.

The whole point of this gathering was for his father to make some big reveal. Apparently, his team of 'magic researchers' had discovered something about electricity that they'd thought impossible and it was decided the elite nobles would be the first to see it. Hence, this gala was planned. Personally, Bei thought it to be a waste of time. But he knew his father thrived on being in the limelight.

"Sorry, sweetheart, my father would have my head if I spilled the beans," he said and gave a proper wink.

Ferrah smirked back, "What Lord Laifan doesn't know won't hurt him." The other girls giggled appreciatively and formed a circle around him, blocking him from his father's view.

Bei laughed, casting his eyes about the room to see if there were any curious onlookers. But the dance floor was full and he doubted anyone could hear over the noise of the orchestra. Well, if it would get the girls off his case, he supposed he could give them a show. "All right, but only a hint," he gave in with another wink that sent the girls into a round of giggles.

To use magic, one had to study it once they reached the proper age, generally around 18, but Bei had grown up with magic. Being the son of Lord Laifan himself, he’d studied magic from the time he could walk. If there was one thing Bei was proud of, it was his proficiency with magic.

One needed a medium to use magic, since it was impossible for humans to simply create magic on their own. The magic was all around them, in the air, in the world itself. Once they learned to harness that magic, the possibilities were endless. To do this, they required some form of object, usually one of sentimental value, to help them focus the magic. Most had small items, such as rings or jewellery, which then had runes put on it to channel the magic. How long the runes would last depended on the type of material the medium was.

Bei’s main medium was his silver cross that he always wore around his neck, but for small tricks like what he was about to perform, he needed only his earrings. Now, to better harness their focus, people were required to touch their medium. But with enough practice, this wasn’t necessary. Bei was proficient enough not to need to touch his earrings, but for the sake of dramatics…

He reached his left hand up to his small diamond earring and gave it a twist. The girls held their breath in anticipation. He smirked and quickly drew his hand away and a shower of twinkling silver lights followed, dancing through the air and twisting through Ferrah’s hair.

The girls all gasped and Bei was thankful the orchestra’s symphony was loud enough to drown them out.

“Ooh,” one girl cooed. “That was simply amazing, Lord Belijah!”

Bei cringed at the use of his full name. Why couldn't people just call him Bei? He hated that he was named after the founder. Why did his father have to be so proud?

Ferrah wasn’t smiling. She cocked an eyebrow sceptically, “What does that have to with the big reveal?” She had known him a long time, after all, and had seen his magic before.

He was saved from replying by the appearance of his sister. "Bei, there you are! There's been a disturbance and I need your help," Rhealyn said, gripping his arm and tugging him away. He sent a quick wave at Ferrah and her friends and tried not to sigh in relief.

"You have impeccable timing," he breathed to his younger sister once they were free from the great hall.

Rhea sent him a smirk. "I know. I could practically hear your desperate pleas for help," she teased. "I couldn't bare it any longer. Nice trick, by the way.”

Bei sighed. "I had to get them off me somehow. I don't even know what Father's planning for tonight, but they wouldn't believe me if I told them that."

"You know Father, always going the extra mile for attention," Rhea rolled her eyes at him. "He's insufferable when it comes to these dumb parties."

"Now now," Bei teased, "you know you love the attention just as much." He stepped ahead of her, holding open the door closing off the stairwell. She went through and then spun to face him, hands on her hips.

"Rude," she quipped. "I deserve the attention. He doesn't."

Bei laughed and stepped around her to head up the stairs. "Is everyone in the balcony?" he asked.

"Yep, I went to find you when I realized it was almost time for the reveal," she ran her fingers through her short hair and then sighed. "I spent the majority of this evening listening to Cress prattle on and on about how fantastic it's going to be."

"As if she knows what it is," Bei gave a small snort. He could just picture their other sister, Cressia, going around the room and bragging to everyone about how amazing their father was.

"Meanwhile, I haven't seen Emelia since the gala began. I think she disappeared with some noble's son," Rhea rolled her eyes and chuckled.

"What?" Bei snapped, immediately turning to go back down the stairs and find his youngest sister.

Bei grumbled for a moment but relented, following his sister up the stairs again. "She has no common sense," he muttered. "Honestly, I swear she has nothing but air up there. I dunno where she got it from."

"She's smarter than you think." Rhea always defended Em. "She's just tired of being the baby."

"Then maybe she should act her age," Bei snapped and then sighed. "Whatever. When she ends up pregnant and father disowns her, she'll learn."

"Ouch, love you too," Em stood at the top of the stairs, holding open the balcony door to them.

Bei shook his head and ignored her, stepping past into the balcony. Cressia sat in one of the plush chairs, staring down at the nobles in the ballroom below them. She glanced up at them when they entered, gave a curt nod and returned her gaze to the room. Cress looked as immaculate as always, her long dark hair pinned up behind her head and her blue eyes sharp behind her glasses.

"He was mostly kidding, Em," said Rhea as she followed Bei and took a seat beside Cressia. The two looked the most alike, aside from Rhea's short hair. Em looked the most like their mother, with her long brown curls and brown eyes.

Bei remained standing, clutching the balcony rails and staring down into the room. He immediately found his father in the centre of the room with a crowd of people around him. He was laughing heartily, his head thrown back and glasses askew.

"Isn't it almost time?" he asked his sisters. "He should be up on stage so we can get this over with."

"Patience is a virtue, dear brother," said Cressia. He wondered why she always tried to be smarter than him. "Father has it all planned out."

"I'm sure he does," Bei muttered. Cress sent him a baleful look and sniffled haughtily, pushing her glasses up her nose. "I don't know that -" he cut himself off as something caught his attention. At one end of the ballroom was where the orchestra was set up and directly opposite was a small stage, placed above everything. His father had to be above everyone and everything, after all. On the stage sat the "reveal" - whatever it was - under a tarp.

While it was necessary for there to be people, his father's workers, around the stage, Bei caught someone who didn't quite fit the profile.

They came in the early light of dawn; a whisper amongst the grasses and a quick step along the path. They stood together at the far end of the plaza, firm in their resolve but Larconia knew as she stood next to her father that they wouldn’t be getting what they wanted.

He glared with silver eyes at everything in sight and Larconia despaired that a face so young could be so jaded. His partner, a girl – maybe younger, maybe not – was more neutral. She stared forward with piercing blue eyes and Larconia met them firmly. Then Larconia nodded and the girl strode forward with the boy a pace behind as the Chief turned from Larconia’s side and led them all into the hall.

By the time the sun fully crested the eastern mountains, the pair had left and Larconia could still hear the echo of the boy’s anger in her ears. Harsh, but childish.

Sansa would not bow to the whims of children.

But she would watch like a mother resigned to her child’s imminent failure and be there to hopefully pick up the pieces. Larconia adjusted the strap of her pack then accepted the updated map from her second to look over. Detours twice through the mountains and once over the rivers with a chance for more due to the rains. She handed it back with a nod of thanks then signaled the rest of her team.

‘Follow them and watch,’ her father had said, ‘Qi’amora is not weak but neither are they.’ 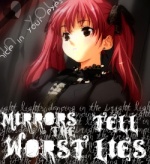